The COVID-19 pandemic has turned the world of work upside down. It is having a dramatic effect on the jobs, livelihoods and well-being of workers and their families and on enterprises across the globe, particularly the small and medium sized. While certain sectors and industries have successfully moved online, pointing the way towards exciting innovations in the world of work, millions of workers have lost their livelihoods and many more – especially women who are concentrated in highly exposed sectors – remain at risk. As with so many aspects of this pandemic, the impacts are falling disproportionately on those who were already in precarious circumstances and who can least absorb the additional blow.

Measures necessary to mitigate the impacts of the COVID-19 virus have had significant knock-on effects on societies and economies. By mid-May 94 percent of the world’s workers were living in countries with some type of workplace closure measures in place. Massive losses in working hours which are equivalent to 305 million full-time jobs are predicted for the 2nd quarter 2020, while 38 percent of the workforce – some 1.25 billion workers – is employed in high-risk sectors.

The impacts of these developments vary considerably between groups of people and countries, depending to a large extent on pre-existing inequalities and government interventions. Those toiling in the informal economy – often without rights at work and social protections – suffered a sixty percent decline in earnings in the first month of the crisis alone. Young people account for more than four in ten employed globally in hard-hit sectors. Combined with disruptions in education and training, this places them at risk of becoming a ‘lockdown generation’ that will carry the impacts of this crisis with them for a long time. Women are disproportionately employed in critically affected sectors such as service, hospitality, tourism and are also impacted by the shifting of economic activity into the domestic sphere, where they carry the majority of increasing levels of unpaid care work. Small and medium-sized enterprises – the engine of the global economy – are suffering immensely and many may not recover. As is the case for the entire crisis, those living in developing countries and fragile contexts face the most dramatic risks or have least resilience. 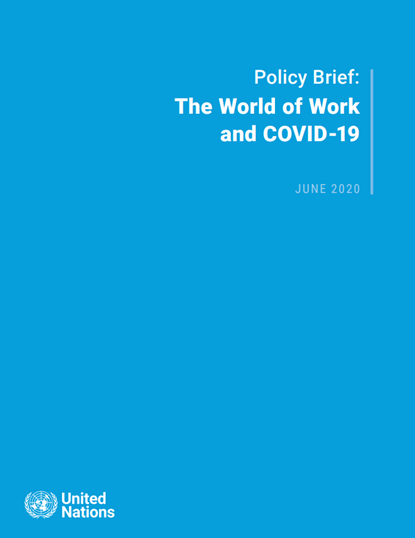