Ceremonial Signing of Letters of Exchange between UN ESCAP and City of Nadee, Thailand

At the sidelines of the Sixth Asia-Pacific Forum on Sustainable Development (APFSD) in Bangkok, Thailand, a first official exchange of letters took place between UN ESCAP and the city of Nadee, Samut Sakhon, Thailand. The Letters of Exchange are a partnership commitment between UN ESCAP and Nadee - one of the five competitively selected pilot cities under the United Nations Development Account project “Integrating the Sustainable Development Goals into local action in support of the implementation of the 2030 Agenda in Asia and the Pacific”.

The letters were signed by the Acting Mayor of Nadee, Mr. Atsadang Wisetwongsa, and by the Director of Strategy and Programme Management Division of UN ESCAP, Mr. Adnan Aliani, and witnessed by the Vice Governor of Samut Sakhon, Mr.Teerapat Kutchamath, Mr. Atsushi Koresawa, Director of the UN-Habitat Regional Office for Asia and the Pacific, and Ms. Penchom Saitang, Director of EARTH Foundation.

In the Letter, the sub-municipality of Nadee confirms its intention to convene a multi-stakeholder coalition to analyse approaches for more sustainable urban resource management in alignment with the 2030 Agenda, to provide relevant qualitative and quantitative information and to reflect the outcomes of the process in local planning and policy frameworks as appropriate. Local technical and management support for the project and the multi-stakeholder process is being provided by EARTH Foundation, while UN ESCAP and UN-Habitat provide technical and financial support.

The delegation from Samut Sakhon also witnessed the opening of the APFSD and visited the Pavilion of Partnerships, where the project was prominently displayed alongside the new Thai translation of the New Urban Agenda and the Urban SDG Knowledge Platform. The latter is an initiative of CityNet, Seoul Metropolitan Government and ESCAP, and is one of the main platforms that will be used to share and disseminate the learnings of this project. 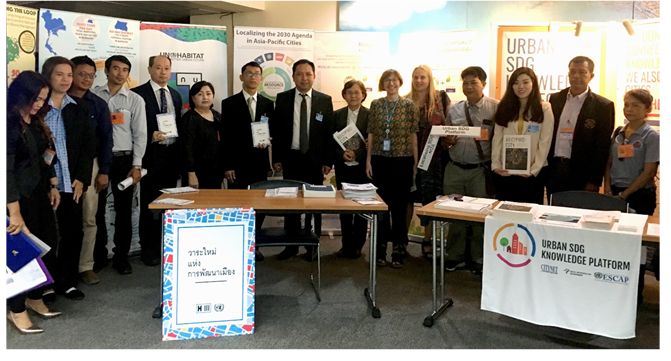 UNESCAP, UN-Habitat and CityNet welcoming the delegation from Nadee and EARTH Foundation at the joint APFSD Exhibition space

When UN member States adopted the 2030 Agenda for Sustainable Development in 2015, they committed themselves to an ambitious set of principles and goals. They pledged to embark on a course of truly sustainable development – which balances the environmental, economic and social spheres – ensuring that human progress unfolds within planetary boundaries and that no one is left behind.

Implementing the 2030 Agenda is a country driven process – where not just the whole of government but all the different stakeholder groups, including business, civil society, academia, and community groups need to play meaningful and active roles. Most concrete action, moreover, has to be taken on the ground – i.e. ‘localized’ in cities, in villages, in communities. This is why, when adopting the 2030 Agenda, Governments pledged to “work with local authorities and communities to renew and plan our cities and human settlements so as to foster community cohesion and personal security and to stimulate innovation and employment.”

The joint UN ESCAP – UN-Habitat project supports Nadee in Thailand, Battambang in Cambodia, Naga City in the Philippines, Nasinu City in Fiji and Ulaanbaatar City in Mongolia in their localizing efforts, specifically focusing on more sustainable urban resource management and on multi-stakeholder engagement. Its learnings, tools and methodologies will be documented and disseminated to cities throughout the Asia-Pacific region.

For more information about the project please contact: escap-edd-suds@un.org.