WMO Statement on the State of the Global Climate in 2019

Concentrations of greenhouse gases, particularly CO2 , continue to rise. The year 2019 ended with a global average temperature of 1.1 °C above estimated pre-industrial averages, second only to the record set in 2016. Without the role of El Niño in the warming increase observed in 2016, 2019 would have been a record year. The government of Mexico has set a new tone in domestic political discussions by bringing forward an ambitious social and economic development agenda – putting development ambitions and people of all social and economic backgrounds in the centre of the debate. At the same time, Mexico’s government has reaffirmed its continuing international commitment to combat global warming with determined national climate action. 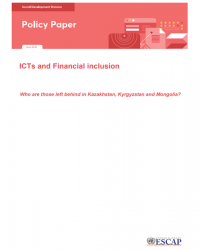 ICTs and Financial inclusion: Who are those left behind in Kazakhstan, Kyrgyzstan and Mongolia?

Financial inclusion and Information and Communication Technologies ICTs underpin inclusive and sustainable development and the commitment to leave no one behind. Both have a substantial role in fast forwarding the achievement of the 2030 Agenda for Sustainable Development. Financial inclusion enables individuals to start saving, obtain loans, start a business, receive remittances from abroad or cash transfers from their governments and therefore improve their lives. The "Korean Civil Society Contribution Report for 2020 HLF" was written to respond to the High-level Political Forum (HLPF), July 7-16, 2020 in New York, USA. This paper presents a common framework for synthesizing and analyzing the role of agriculture and land use in the NDCs to facilitate a better understanding of country priorities, challenges and support needs. The average temperature on the planet is rising at an unusually fastpace and is threatening the balance of the world’s natural ecosystems. The reason for extreme temperatures, floods, large scale fires and mass extinctions of species is mainly attributed to our unsustainable consumption behaviour, that can be noted since the beginning of industrialization. As a result, human lives are being increasingly endangered, as we rely on natural resources. Regional Analysis of the Nationally Determined Contributions of Countries in Southern-Eastern Europe and Central Asia: Gaps and opportunities in the agriculture sectors

The main objective of this report is to provide a regional synthesis of the current climate change mitigation and adaptation commitments in the agriculture sectors of the Southern Europe, Eastern Europe and Central Asia (SEECA) region, as set forth in the NDCs, and to identify opportunities for enhancing mitigation and adaptation ambitions, capturing their synergies and leveraging climate finance and international support options in the region. For many people across the world, climate change is already a matter of life and death. Yet we are still not doing enough to protect them. Nor are we doing enough to capitalize on the social, economic and environmental opportunities of climate action, which can enable economies and societies to thrive sustainably for decades to come. As countries pursue sustainable development across sectors as diverse as health, agriculture, and infrastructure, sectoral policies interact, generating synergies that alter their effectiveness. Identifying those synergies ex ante facilitates the harmonization of policies and provides an important lever to achieve the sustainable development goals (SDGs) of the United Nations 2030 Agenda.